PISA and the surrounding areas 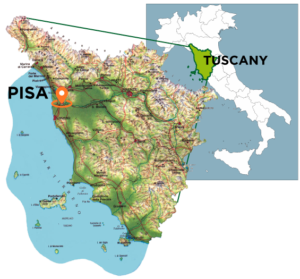 Probably the most important thing you need to know before coming to Pisa is where Tuscany is located, how far is it from where you live, and which towns, cities and areas make up this Region.

The city of Pisa is close to many other important and famous cities in Tuscany and in Liguria, such as Florence, Lucca, Livorno, Genova and other minor centers of great beauty such as Volterra and Cinque Terre. All these cities can be easily reached by public transportation or by car. The immediate surrounding region is, however, very rich in lesser known natural and artistic treasures, which well deserve to be discovered and appreciated during your holiday in Pisa.

Moreover, Pisa is only few kilometers away from the beach and from very popular resorts such as Versilia and Viareggio, Forte dei Marmi, Marina di Pietrasanta. The closest beach towns, Marina di Pisa and Tirrenia, can be reached in 10 to 20 minutes, by car, bus or train.

The city of Pisa rises above the banks of Arno, just before the mouth of the river at Marina of Pisa. It is one of the most important cities in Tuscany and it is extremely well-known in the world, because of its famous symbol: “the Leaning Tower“.

Pisa is both an ancient and modern city. On the one hand, it is proud of its past , when it was a Marittime Republic and became a world power during the Middle Ages. On the other hand, now is famous for having three of the most important universities in Italy: the Scuola Normale Superiore, the Sant’ Anna school of Advanced Studies and the University of Pisa.

When Pisa is mentioned, everybody thinks about its tower, but this impressive leaning bell tower it’s just one of the many monuments you can find in this nice Tuscan city. The beautiful Piazza del Duomo collects, in a unique architectural complex in the world, the so called Campo dei Miracoli (Miracles square), the main religious monuments of the city: the Tower, the Cathedral, the Baptistery and the Campo Santo (the graveyard).

Pisa is a university city full of life. Its centre boasts a wide range of meeting places: bars, pubs, restaurants, pizzerias, discos and live music pubs. Around Piazza Garibaldi and Piazza delle Vettovaglie you have the chance to plunge into the heart of a youthful lifestyle and enjoy the classic “happy hour” in one of the many bars of this area. 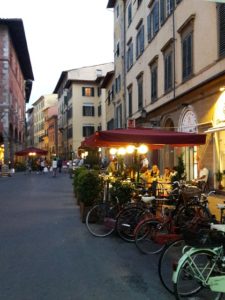 The cultural life in Pisa revolves around museums, cultural associations, cinemas and theatres where programmes of events include theatre, concerts, opera, dance and other events. The most important theatre is the Teatro Verdi located in the city centre, built between 1865 and 1867 and which was officially opened with the opera “Guglielmo Tell” by Rossini. This theatre has one of the biggest stages in Italy.

Besides the Teatro Verdi there is Sant’Andrea Theatre located inside the Romanesque Sant’Andrea Church (12th Century).

There is also Cinema Teatro Lux located in Santa Caterina Square ain the ancient chapel of SS. Salvatore (14th Century). The two latter theatres often host shows of local companies at very cheap prices. If you like going to cinema, Pisa offers lots of them, in the city centre as well as outside the medieval walls. At the Arsenale Cine Club you can find movies in various European languages. Wednesdays is Spectator’s Day at the cinemas, so tickets cost only 4,50 euro instead of 7,00. Many young people take advantage of this discount to go to the cinema. If you like exhibitions many of them are hosted at the Palazzo Blu and at the Expo Center SMS San Michele degli Scalzi.

During the year you can participate in several events. Please mark the following dates on your calendar:

May
The feast of Saint Ubaldo, flower market along the river Arno at Le Piagge;

June
In this month many events are organized, which is why residents call it “giugno pisano“: 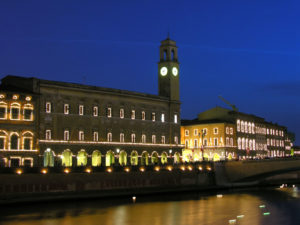 16th June: the Luminara, on the eve of the feast of the Patron Saint, all the façades of the buildings on the Arno embankments are illuminated by candles and nightlights (also called lampanini). The feast, also called “the Lights of San Ranieri” reaches its climax with a beautiful firework show;

17th June: Palio of San Ranieri, feast of Pisa’s Patron Saint. In the afternoon four boats representing the colours of the most ancient districts of the city take part in a regatta on the river Arno. This is a vestige of the prestigious tradition of Pisa as one of the ancient Maritime Republics. Last Sunday of June: the Battle of the Bridge (Gioco del Ponte): it is played on the Ponte di Mezzo (the Middle Bridge) between the teams of Tramontana and Mezzogiorno. The Gioco del Ponte starts in the evening after the historical 16th century costume parade.

More
Every second week end of the month, Pisa hosts a craftsmanship market; every third Saturday of the month in Piazza della Berlina there is a food market with a wide variety of local and organic vegetables, honey and cheese. 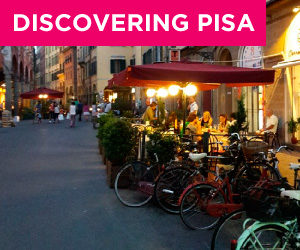